Metal Temple’s Cami Kyttle recently had a chance to talk to Mike Campese, a guitar virtuoso and all-around music performer, best known for performing with the ephemeral Trans-Siberian Orchestra. Also holding an extensive and well-received solo career discography, Campese spoke with us about his life and his newest solo album entitled “Chameleon.”

First of all, how the hell did you learn to play guitar like that?!
Lots of practice! It took many years of hard work and dedication. I developed my speed and technique pretty much after the first year of playing guitar and as time went on I developed more control and feel. I’m very versatile and I love all types of music. From learning to play different styles and techniques over the years, it just comes out in my playing and writing. I did take lessons and I went to GIT in Hollywood, CA. But, if you don’t put the time in, all that does not mean anything.

How did you decide which songs would have vocals attached and which would be strictly instrumental?
Usually, after I came up with the initial riffs for the tunes, I then decide if it will be a vocal tune. Sometimes before I write the tune I will get vocal ideas or a concept in my mind and how I want the song to sound. Since I’m not a singer, I’m a “guitarist that sings” I usually come up with the music first and then I will add vocals. Also, I like to have a few vocal tunes on each CD that I put out. It opens things up and it can widen your audience. Sometimes it just happens before your eyes, I always let things happen naturally…. 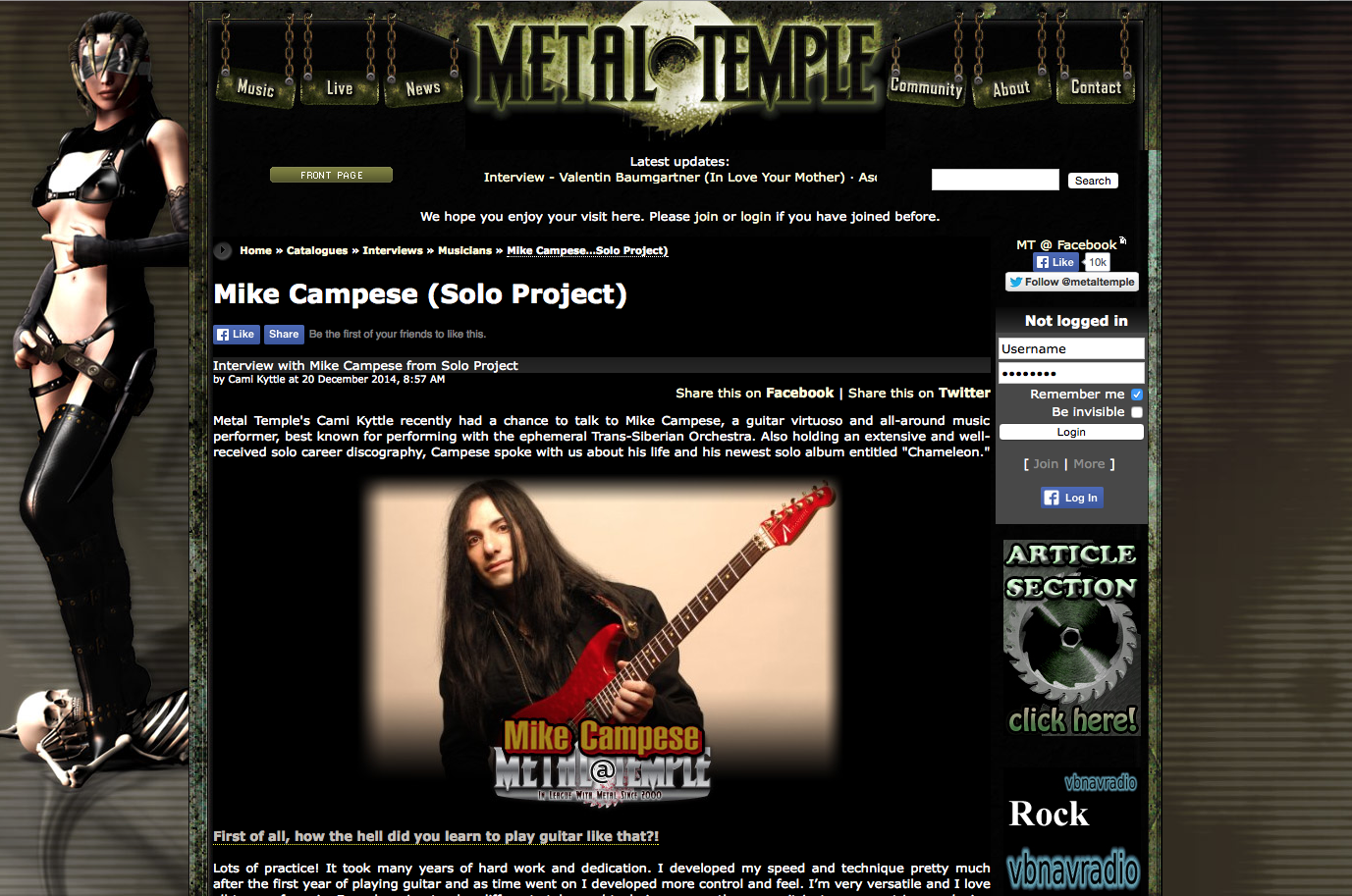 How did you come up with the names of the songs that are just instrumental, such as “Pasta & Bananas?”
Lol. Everyone asks about this title! Every song and title I come up with is for a reason, even if it is an instrumental or a vocal tune. I decided to name that song “Pasta and Bananas,” because that is my ritual before I play. I usually eat pasta and bananas before I go on stage, separate of course. I may have pasta earlier and then right before I go on stage I eat a banana. It gives me energy when I play and I like to have food in my system. I don’t like to have steak before or something heavy, because it takes a while to digest and it can slow you down, at least to me it does.

What was it like playing for The Trans Siberian Orchestra? What made you decide to go solo?
Playing for the Trans-Siberian Orchestra was a really great experience. Everyone in the band are great musicians and they all are classically trained. It was great to be in a multi platinum selling band and the music is really fun to play. Even though I have been a sideman in bands and played with many national acts, I feel I do best playing my own music. I think it is because I like to write music and I have a lot to say. Some musicians just play other peoples music and are happy doing it, I like to do both. In my project I may throw in a cover tune and do it in my own way. Also, it is great to be in control of your music with no one is looking over your shoulder.

How long did this album take?
I would say off and on for about a year. I didn’t work on it straight through. I would write and record for a little while and then take breaks for performances etc. The music usually happens pretty quick and the guitar takes the quickest time to record. Sometimes there can be delays, because you are waiting for other people involved to finish their job. I mainly do most of it myself with just a little bit of outside help.

What were some of your inspirations for this CD?
Inspiration for the music comes to me from real life situations and I can get really inspired in new environments. I have gotten many ideas traveling to a new destination with or without my guitar, on a plane etc. When you look back at the process it is like a big puzzle. The song “Flashback” from the CD was a chord progression that I came up with when I was attending GIT in Hollywood, CA. I dug up the recording of the progression I did and then I put a melody to it. The whole feel of the tune closely represents my experience in LA during that time.

What do you want new listeners to walk away with from this album?
It is always great to have new listeners that like the music. The main goal of a song writer is to have a listener walk away and remember melodies he or she heard that stick in their heads. Also, for them to say that this guy can really play and has something different to offer than the typical guitar shredder.

As I’m sure you’re an inspiration to many musicians… who influenced you when you were first learning to play?
When I first was learning the guitar, Black Sabbath was my all time favorite band. I think it was the very first album that got me hooked and after I started buying the other albums. During that time I learned how to play a lot of the riffs from the tunes. I was also listening to Dio, Ozzy and all of the guitar driven rock bands like, Van Halen, Led Zeppelin etc. I was listening to players like Al Di Meola, Stevie Ray Vaughn, Randy Rhoads and Jimi Hendrix etc. I got into the whole neo classical shred thing when Yngwie came out and I was already pretty fast because of listening to players like Al Di Meola. Also, I got into classical music and I was listening to Paganini, Vivaldi, Mozart and Beethoven and more. My Dad was a violinist, so I think that is where the influence came in. He told me if you want to be great you have to listen to everything. I like all kinds of music, I like fusion music as well. There is a lot more names I could of mentioned.

I read that you teach lessons to over 60 students a week, along with currently having 8 solo albums. How do you fit all of that into your busy schedule?
I have been doing that for years and it is all about balance. I don’t teach every day and when I’m not teaching I’m working on writing and recording. The good thing is, I don’t start teaching until late afternoon, so I have the mornings and late evenings. Also, I write lesson columns for guitar magazines and I have been doing that for many years as well. It is important to set goals, if you set a goal you will finish it.

“Vegas (Playing the Slots)” was one of my favorite songs on the album. How did you decide to use a casino theme? As a listener, I felt like I hit it big playing at a slot machine!
Thanks, that is a real fun song. I think I got the initial idea when I was in the Las Vegas airport during a long layover. I remember having to sleep in there overnight, which is impossible to do in an airport. In Las Vegas there are slot machines everywhere and in the airport they are on all night. Since I always have a guitar with me I came up with the initial riff in the airport. Later I came up with all the other sections and it all came together. I don’t even play slot machines either.

How did the album name “Chameleon” come about?
I remember flying into Los Angeles and while being on the airplane and the word “Chameleon” popped in my head. I was saying to myself, I’m a musical Chameleon because my music moves around a lot and it changes many colors. I was closely relating my music to the Chameleon – like creature. When the plane landed I went to my phone and googled Chameleon and the creature. I said, yes I will call the CD “Chameleon.”